Beyond 5G: Wireless communications may get a boost from ultra-short collimating metalens 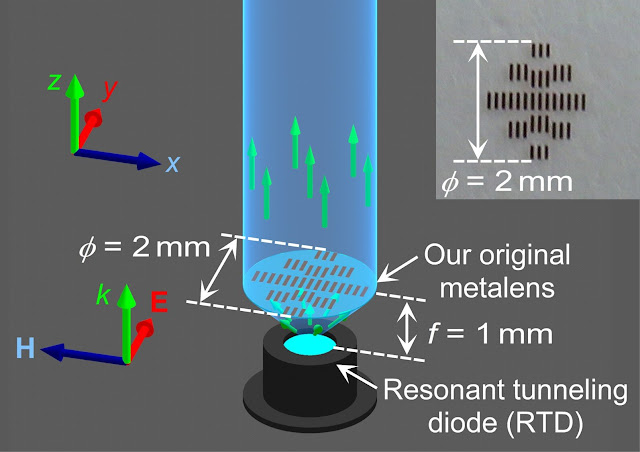 Screens may be larger on smartphones now, but nearly every other component is designed to be thinner, flatter and tinier than ever before. The engineering requires a shift from shapely, and bulky lenses to the development of miniaturized, two-dimensional metalenses. They might look better, but do they work better?

A team of Japan-based researchers says yes, thanks to a solution they published on July 7th in Applied Physics Express.

The researchers previously developed a low-reflection metasurface—an ultra-thin interface that can manipulate electromagnetic waves—specifically to control terahertz waves. These waves overlap millimeter waves and infrared waves, and, while they can transmit a significant amount of data, they easily attenuate in the atmosphere.

The technology may not be suitable for long-range wireless communications, but could improve short-range data exchanges, such as residential internet speeds, said paper author Takehito Suzuki, associate professor in the Institute of Engineering at Tokyo University of Agriculture and Technology. According to Suzuki, the researchers have taken a step toward such application developments by using their metasurface to craft the world's best ultra-short metalens that collimates to align an optical system with a distance of only one millimeter. The metalens is capable of increasing transmitted power by three at the far field, where the signal strength typically weakens.

"Terahertz flat optics based on our originally developed low-reflection metasurface with a high-refractive index can offer attractive two-dimensional optical components for the manipulation of terahertz waves," Suzuki said.

The challenge was whether the collimating lens, which converts approximately spherical-shaped terahertz waves to aligned terahertz waves, made with the metasurface, could be mounted closely to the electronics—called a resonant tunneling diode—that transmits terahertz waves at the right frequency and in the right direction. The minimal distance between the diode and the metalens is the necessary ingredient in current and future electronic devices, Suzuki said.

"The 0.3 terahertz band is a promising candidate for 6G offering advanced cyber-physical systems," Suzuki said. "And our presented collimating metalens can be simply integrated with various terahertz continuous-wave sources to accelerate the growth of emerging terahertz industry such as 6G wireless communications."

Posted by Terahertz Technology at 12:00 AM