The Truth about Terahertz Illustration: Chad Hagen
Wirelessly transfer huge files in the blink of an eye! Detect bombs, poison gas clouds, and concealed weapons from afar! Peer through walls with T-ray vision! You can do it all with terahertz technology—or so you might believe after perusing popular accounts of the subject.
The truth is a bit more nuanced. The terahertz regime is that promising yet vexing slice of the electromagnetic spectrum that lies between the microwave and the optical, corresponding to frequencies of about 300 billion hertz to 10 trillion hertz (or if you prefer, wavelengths of 1 millimeter down to 30 micrometers). This radiation does have some uniquely attractive qualities: For example, it can yield extremely high-resolution images and move vast amounts of data quickly. And yet it is nonionizing, meaning its photons are not energetic enough to knock electrons off atoms and molecules in human tissue, which could trigger harmful chemical reactions. The waves also stimulate molecular and electronic motions in many materials—reflecting off some, propagating through others, and being absorbed by the rest. These features have been exploited in laboratory demonstrations to identify explosives, reveal hidden weapons, check for defects in tiles on the space shuttle, and screen for skin cancerand tooth decay.
But the goal of turning such laboratory phenomena into real-world applications has proved elusive. Legions of researchers have struggled with that challenge for decades. Illustration: George Retseck
ATMOSPHERIC EFFECTS: Terrestrial signals sent at terahertz frequencies can experience extreme atmospheric absorption, due primarily to water vapor and oxygen. For horizontal transmission at sea level and normal humidity, as shown here, the signal attenuation clearly peaks between 1 and 10 terahertz. (Source: Mark J. Rosker and H. Bruce Wallace, “Imaging Through the Atmosphere at Terahertz Frequencies,” IEEE MTT-S International Symposium, June 2007.) Click on the image to enlarge.
The past 10 years have seen the most intense work to tame and harness the power of the terahertz regime. I first became aware of the extent of these efforts in 2007, when I cochaired a U.S. government panel that reviewed compact terahertz sources. The review’s chief goal was to determine the state of the technology. We heard from about 30 R&D teams, and by the end we had a good idea of where things stood. What the review failed to do, though, was give a clear picture of the many challenges of exploiting the terahertz regime. What I really wanted were answers to questions like, What exactly are terahertz frequencies best suited for? And how demanding are they to produce, control, apply, and otherwise manipulate?
So I launched my own investigation. I studied the key issues in developing three of the applications that have been widely discussed in defense, security, and law-enforcement circles: communication and radar, identification of harmful substances from a distance, and through-wall imaging. I also looked at the 20 or so compact terahertz sources covered in the 2007 review, to see if they shared any performance challenges, despite their different designs and features. I recently updated my findings, although much of what I concluded then still holds true now.
My efforts aren’t meant to discourage the pursuit of this potentially valuable technology—far from it. But there are some unavoidable truths that anyone working with this technology inevitably has to confront. Here’s what I found. 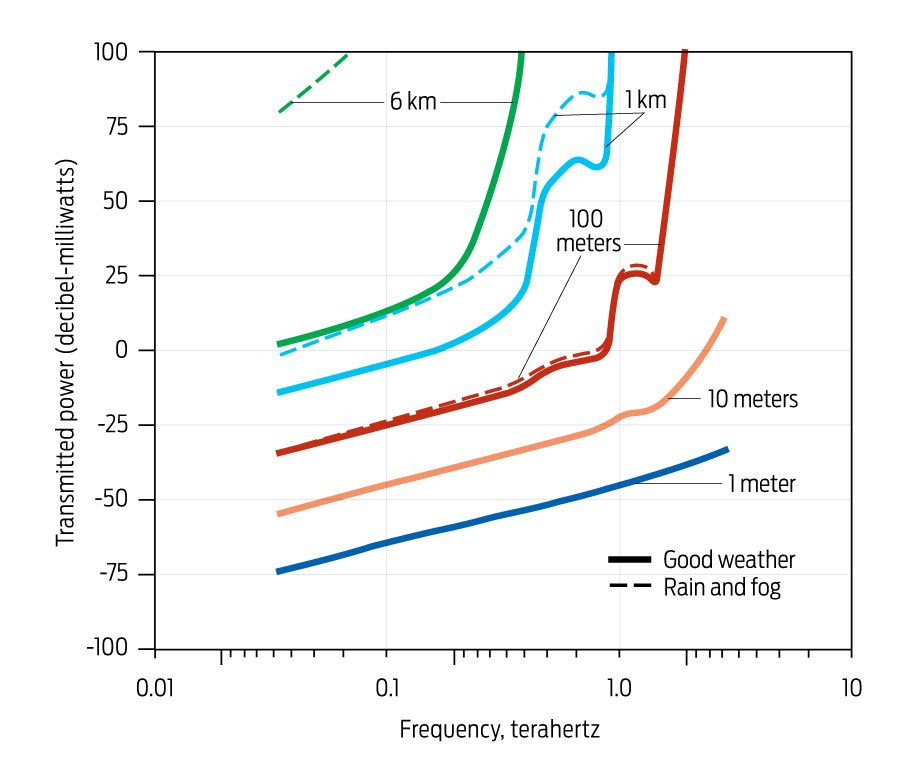 Illustration: George Retseck
TERAHERTZ WALL: The power needed to send data at terahertz frequencies would be impractically high in many cases. For a line-of-sight terrestrial communication link using fixed-gain antennas, shown here, transmitting at distances of less than 100 meters is the only way to avoid the “terahertz wall.” Click on the image to enlarge.
Although terahertz technology has been much in the news lately, the phenomenon isn’t really new. It just went by different names in the past—near millimeter, submillimeter, extreme far infrared. Since at least the 1950s, researchers have sought to tap its appealing characteristics. Use of this spectral band by early molecular spectroscopists, for example, laid the foundation for its application to ground-based radio telescopes, such as theAtacama Large Millimeter/submillimeter Array, in Chile. Over the years a few other niche uses have emerged, most notablyspace-based remote sensing. In the 1970s, space scientists began using far-infrared and submillimeter-wave spectrometers for investigating the chemical compositions of the interstellar medium and planetary atmospheres. One of my favorite statistics, which comes from astronomer David Leisawitz at NASA Goddard Space Flight Center, is that 98 percent of the photons released since the big bang reside in the submillimeter and far-infrared bands, a fact that observatories like the Herschel Space Observatory are designed to take advantage of. Indeed, it’s safe to say that the current state of terahertz technology rests in good measure on advances in radio astronomy and space science. 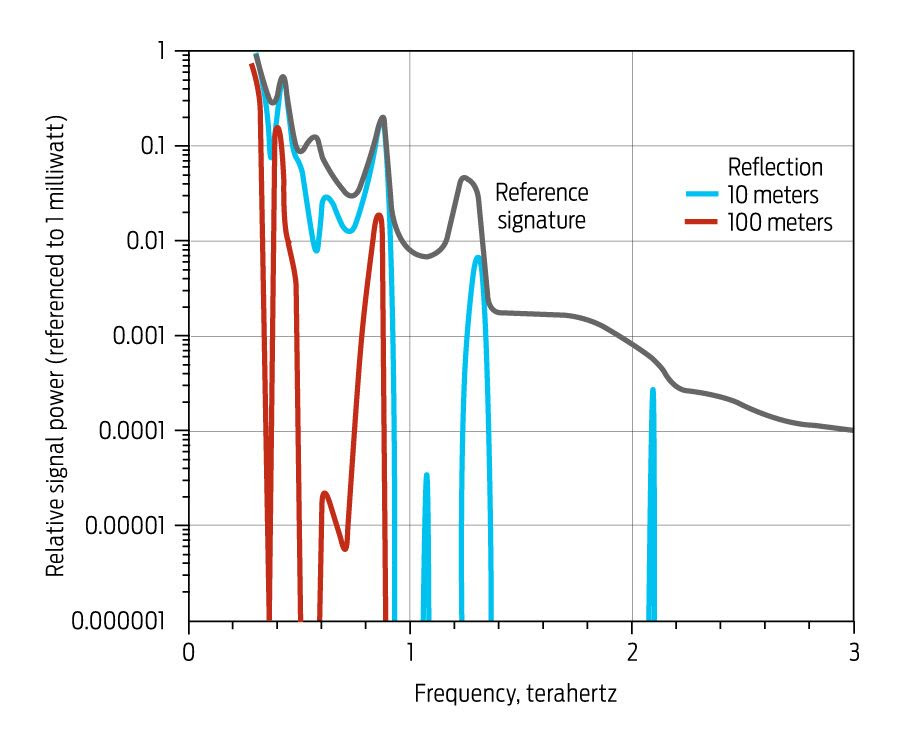 Illustration: George Retseck
THE UNDETECTED: When attempting to identify unknown substances at a distance, nearly all of the terahertz signal will be lost or distorted by the atmosphere. Here, the gray line is a fictitious signature for a sample being probed in reflection mode. At distances of 10 meters and 100 meters [blue and red lines], the sample’s distinct spectral features are washed away. Click on the image to enlarge.
But orbiting terahertz instruments have a big advantage over their terrestrial counterparts: They’re in space! Specifically, they operate in a near-vacuum and don’t have to contend with a dense atmosphere, which absorbs, refracts, and scatters terahertz signals. Nor do they have to operate in inclement weather. There is no simple way to get around the basic physics of the situation. You can operate at higher altitudes, where it’s less dense and there’s less moisture, but many of the envisioned terahertz applications are for use on the ground. You can boost the signal’s strength in hopes that enough radiation will get through at the receiving end, but at some point, that’s just not practical, as we’ll see.
Obviously, atmospheric attenuation poses a problem for using terahertz frequencies for long-range communication and radar. But how big a problem? To answer that question, I compared different scenarios for horizontal transmission at sea level—good weather, bad weather, a range of distances (from 1 meter up to 6 kilometers), and specific frequencies between 35 gigahertz and 3 terahertz—to determine how much the signal strength degrades as conditions vary. For short-range operation—that is, for signals traveling 10 meters or less—the effects of the atmosphere and bad weather don’t really come into play. 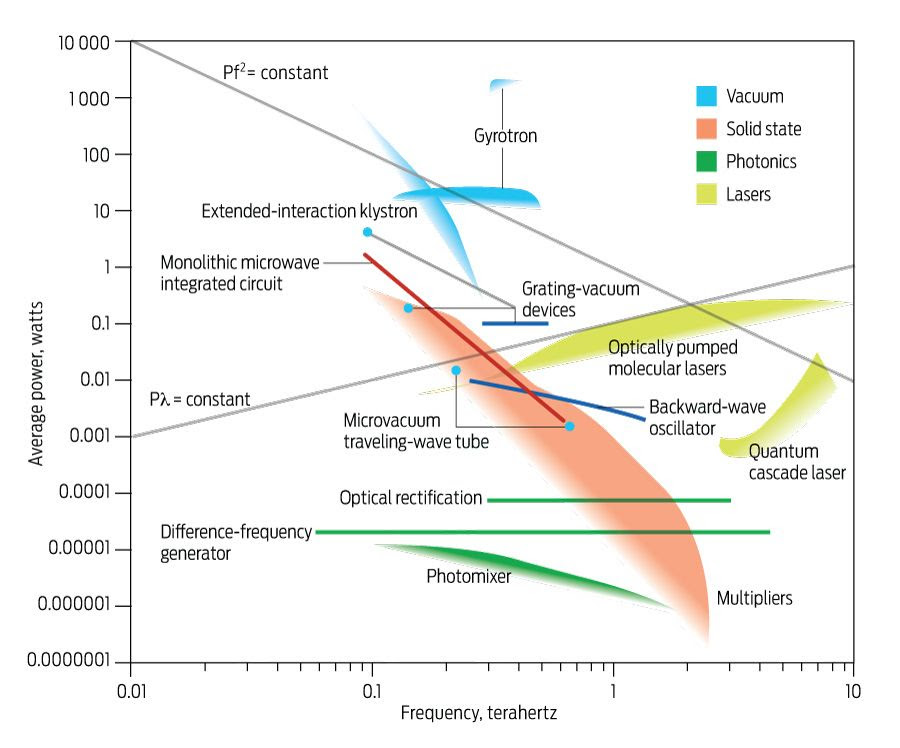 ABOUT THE AUTHOR: Carter M. Armstrong is vice president of engineering in theelectron devices division of L-3 Communications, in San Carlos, Calif. A vacuum-device scientist, he says one of his favorite IEEE Spectrum articles of all times is Robert S. Symons’s “Tubes: Still Vital After All These Years,” in the April 1998 issue. “It was true then, and it’s still true today,” Armstrong says.

Many of the topics discussed in this article, including terahertz applications and the development of terahertz sources, are treated in greater technical detail in the inaugural issue of IEEE Transactions on Terahertz Science and Technology, Vol. 1, No.1, September 2011. Among the papers dealing with applications, for example, are “Explosives Detection by Terahertz Spectroscopy—A Bridge Too Far?” by Michael C. Kemp and “THz Medical Imaging: In Vivo Hydration Sensing” by Zachary D. Taylor et al.
Mark J. Rosker and H. Bruce Wallace discuss some of the challenges of terahertz imaging in their paper “Imaging Through the Atmosphere at Terahertz Frequencies,” IEEE MTT-S International Symposium, June 2007. The paper, which is the source for the figure “Atmospheric Effects” in this article, details the important role that humidity plays in atmospheric attenuation at terahertz frequencies.
Many studies have looked at various aspects of operating in the terahertz regime. For instance, “A Study Into the Theoretical Appraisal of the Highest Usable Frequencies”[PDF], by J.R. Norbury, C.J. Gibbins, and D.N. Matheson, investigates the upper operational limits for several potential communications and radar systems.
Data on the transmission and reflectance of materials at terahertz frequencies is important for analyzing and developing applications. A helpful database of terahertz attenuation values for many common materials is included in the May 2006 report“Terahertz Behavior of Optical Components and Common Materials” [PDF], by Andrew J. Gatesman et al.
_______________________________

My Note: I also recommend that you read these comments from this related post: