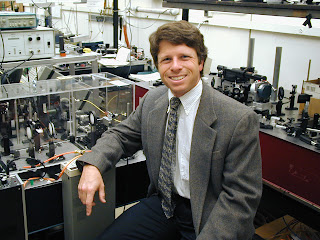 Hi Randy,
I’m writing from the TeraNano meeting, to give you a summary of just a few of the highlights. This conference is an annual review associated with the PIRE (Partnerships for International Research and Education) program at RiceUniversity which is sponsored by the National Science Foundation (among others). This program is run by Professor Junichiro Kono (my colleague at Rice) and Professor Masa Tonouchi from Osaka University. It funds student exchange between the US and Japan, and has been a very successful vehicle for a lot of fruitful research collaborations. It focuses on the science at the overlap between terahertz spectroscopy and nano-materials, hence the name ‘TeraNano’.
Consistent with the mission of NSF-funded activities, the subject matter here this week is very much basic research. A lot of the research being discussed here involves the use of terahertz to study carbon nanostructures, especially graphene (a single layer of carbon atoms in a hexagonal lattice). This is clearly the ‘material of the moment’, since there is a lot of optimism associated with potential applications in electronics, transparent displays, opto-electronics, and so on. It turns out that a lot of the interesting possible applications of graphene can be studied using terahertz techniques, so there is a natural overlap between the two fields. One nice highlight here was the talk by Berardi Sensale-Rodriguez (University of Notre Dame) on the use of graphene as a modulator for terahertz radiation. This device could eventually be used to switch terahertz beams on and off electrically at high speed, a capability which is currently not easy to do by other means. Beyond graphene, I would also mention an interesting talk by Ben Murdin (University of Surrey), who is investigating the use of single-atom impurities in silicon for quantum computing – can we use one phosphorus atom to store one bit of information in its quantum state? If so, then controlling those individual bits could be accomplished using terahertz radiation. My own talk was inspired by my group’s recent work on using parallel metal plates for guiding terahertz waves. We’ve been thinking about how to engineer the amount of radiation that emerges from the wave guide at the output end, and we now have some nice results on minimizing this output, making a (nearly) perfect reflector. This could lead to a waveguide-based resonator, where the radiation is trapped inside the waveguide by these nearly perfect reflections at all output facets.
This afternoon, we have also heard several talks on the integration of terahertz science and technology into educational missions at various levels. Of course, the TeraNano program has ongoing self-evaluation of its effectiveness at the undergraduate and graduate level. But there is also now an effort to bring simple terahertz experiments into high schools, which can help to inspire students to pursue STEM fields when they get to college.
I would also like to put in a small advertisement for a fledgling activity at Rice University. Several of my colleagues and I are organizing an effort to initiate a new seminar series at Rice in the topical areas of terahertz, infrared, and millimeter-wave science and technology. We hope to launch this seminar series early next year, to have regularly scheduled speakers at Rice in these fields. I would welcome suggestions of possible speakers from the readers of your blog, and of course anybody who is in the Houston area would be welcome to attend any of the talks.
Regards,
Dan Mittleman