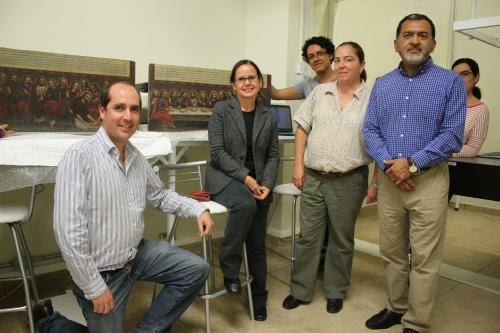 A multidisciplinary research team studying two paintings by artist Hermenegildo Bustos in the side altar of the parish of Our Lady of the Immaculate Conception in Purisima del Rincon, Guanajuato, found three layers with a number of previously unknown modifications not visible to the naked eyeThese pictures were originally painted in the first half of the eighteenth century  and retouched in the early nineteenth and in 1903. For a month, CIO specialists worked with a terahertz spectroscopy technique through which they discovered "hidden images" in the work, and rebuilt several details and objects present in previous layers that had been covered.

Enrique Castro Camus from CIO, explains that by using this technique, they managed to reveal original images and retouching done in 1816 and 1903. In the first, there are chandeliers and curtains that Hermenegildo Busto subsequently decided to remove in 1903.
"What we do is send a short pulse of light that reaches the surface of the work; part of the light is reflected there and successively on each layer of paint. Then, we detect the pulse return, we seek the echoes and reconstruct what is in the inner layers."
He adds that the technique is applied point-by-point and recovered layer by layer using software designed by the student Arturo Hernández.
According to the specialist, this technique is of far infrared light or "terahertz light," a type of light between the infrared and microwave, with which it is possible to reconstruct thin layers of paint.
Castro Camus notes that during the month the team had access to the two original paintings, they concluded that by the terahertz spectroscopy technique they could reconstruct hidden layers and identify what elements had been changed or painted over.
A little bit of history
A student at the School of Conservation and Restoration of the West in Guadalajara, Montserrat Gómez, a graduate of the Bachelor of Restoration of Movable Property contacted her university, the College of Michoacán and the National Institute of Anthropology and History (INAH) of Guanajuato, and raised the idea of analyzing the pictures with this technique, since according to the very brief historical record, it was retouched several times.
After performing bureaucratic procedures, INAH lent the researchers the two paintings, and they were taken to the CIO laboratory.
"After analyzing, we generated images of the hidden layers of paint using a terahertz spectroscopy technique and aiming to reconstruct many details and objects that were in the previous layers, and which are not visible in the latest version."
With this technique, the researchers demonstrated the ability to make a three-dimensional reconstruction of each one of the layers of paint behind the same work and, moreover, obtain data of interest to historians and those working in the art conservation sector.
With this result, says Castro Camus, researchers can offer this tool to future INAH researchers or specialists in the area of cultural heritage and art conservation.
"Combining science and other disciplines can yield interesting results; besides the cultural area, we can apply the technique in biomedicine, solar cells and semiconductors," concludes the specialist at CIO.